A web app that calculates forced checkmates in a chess position

I was always fascinated by the idea of building a chess related app. I do play chess casually, and being able to acurately describe the game in abstract terms seems an exciting design challenge. The huge, (but not infinite![1]) number of possible positions adds a spicy performance touch in the mix.

I was mainly interested in the deterministic side of the game, were I wouldn't have to delve into the depths of AI and statistics. Checkmate analysis is a great candidate since

The goal of the app is finding all moves that result in a forced checkmate for a given position and depth.

A forced checkmate occurs when the attacking player can checkmate for every possible move of their opponent.

Its depth is the maximum number of moves the opponent can make before a checkmate occurs. 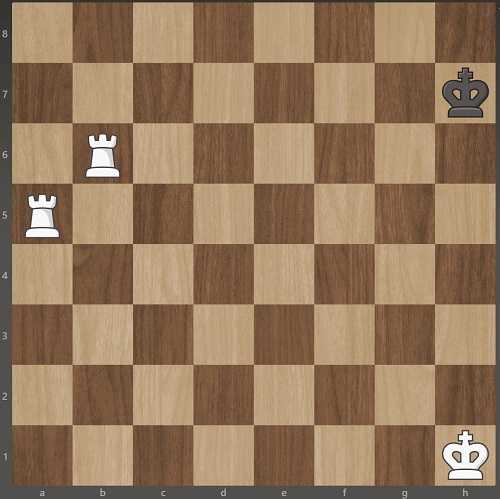 Let's assume that white plays first in the above position. Ra7 results to a forced checkmate (and effectively wins the game), since

There are two aspects of the implementation that particularly interested me:

There are incredible chess engines out there that I could use to my advantage. I decided to "reinvent the wheel" here for the fun and knowledge that comes out of discovery. Describing the relationships between each piece and the board proved to be a great class design exercise. The next step would be investigate ways to improve the performance and allow for a maximum move depth.

The language of choice is Java 8, which offered me a good balance between familiarity of syntax and performance. Interesting aspects of the implementation include

The usual suspects React.js and Redux.js form the front-end core. I chose Material-UI for styling/components, and I have to say it provides a great developer experience. React DnD proved handy for moving pieces around the board.

I used Cypress for my first attempt to automated end-to-end tests. I got a great impression out of it: it is a modern tool, with great documentation and a plethora of best practice guidelines and tips. I also found the Cypress courses in https://egghead.io very helpful.

Kill the King is fully deployed in AWS:

[1] How many chess games are possible?, YouTube video about the Shannon number (spoiler: at least 10120 😲 )